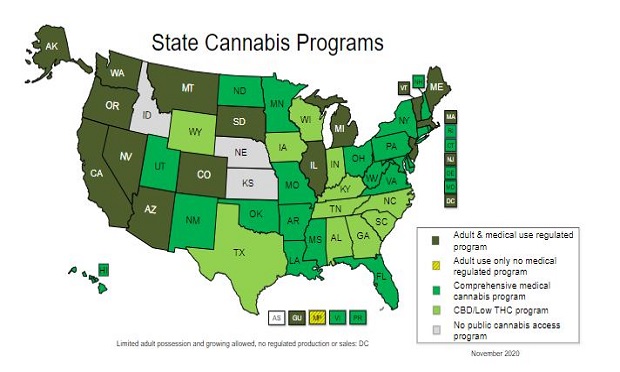 So far, 34 states in the U.S. have legalized or decriminalized cannabis. (Graphic: National Conference of State Legislatures) 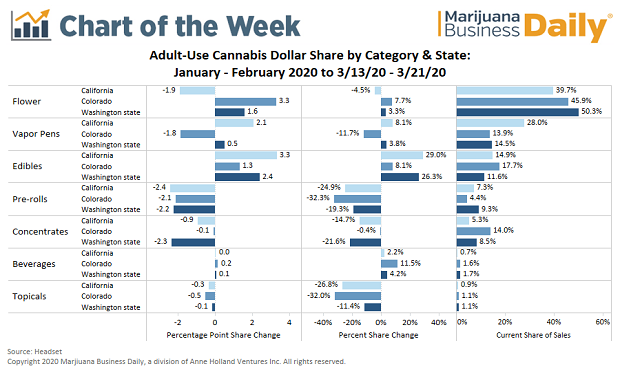 The global coronavirus pandemic impacted how much cannabis adults use in the U.S. as well as they types of cannabis products they consume. (Graphic: Marijuana Business Daily/Anne Holland Ventures Inc.) 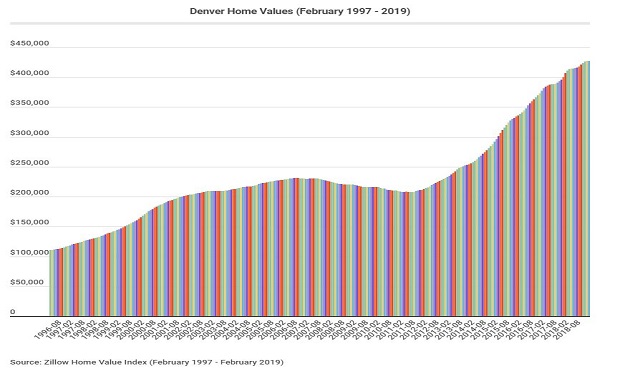 Northwest Denver’s Berkeley neighborhood is characterized by quiet, tree-lined residential streets and older homes that are slowly giving way to tall, modern multiplexes. A resident in this much-sought-after ZIP code recently strolled down one of the community’s thoroughfares when he spotted a poster tacked to a vacant storefront: “NOTICE: A BUSINESS APPLIED FOR A TRANSFER OF LOCATION FOR A RETAIL MARIJUANA STORE AT THIS LOCATION.”

The announcement from the city’s Excise and License Department alerted neighbors to the pending arrival of yet another cannabis dispensary. In nine years since Colorado voters moved to legalize marijuana, hundreds of dispensaries have sprouted up around the state along with myriad marijuana “grows” and cannabis-product manufacturing facilities.

So far, 34 states in the U.S. have legalized or decriminalized cannabis. But legalization alone doesn’t translate into an established, well-run industry. High-level risk analysis that’s become a cornerstone of the insurance business goes a long way toward creating the best practices that benefit businesses, consumers and society.

Consider the transportation of hemp, which is a cannabis plant that differs from marijuana because it’s not psychoactive and contains markedly less tetrahydrocannabinol (THC) — generally .3% or less. Hemp’s many industrial applications include the processing of its cannabidiol (CBD) for wellness products to the use of its fibers for clothing and construction materials. The plant became legal with the passage of the 2018 Farm Bill. But the hemp business remains fraught with risks.

For instance, a freight truck driver was transporting a legal load of hemp from Oregon to Colorado in 2018 when Idaho State Police stopped him. They seized 7,000 pounds of hemp, believing it to be marijuana, and charged the driver with felony drug trafficking.

“It’s happened numerous times over the last few years,” says Jeremy Powers, a strategic advisor at 357 Hemp Logistics, a firm that fused expertise in transportation, medical devices and supply-chain risk to address hemp shipping demands. “You’ve got people who come up with great business ideas and great products, and they know how to sell them, but supply chain logistics are left to the very end,” Powers notes.

Aiming to mitigate such risks, 357 Hemp Logistics is “extremely harsh when it comes to our standard operating procedures,” Powers says.

The Denver homeowner mentioned above was none too pleased about the pending new pot shop on the block. He turned to Nextdoor.com, the social media platform for neighbors, to share his concerns:

“This will cause more traffic, decreased home values and less parking… I wouldn’t choose to live next to (a dispensary) nor would I have purchased this house had I known.”

“More people driving under the influence and more fried brains,” one neighbor wrote.

“We already had one shut down because of its proximity (to a school),” another posted.

“I’d rather see (an ice cream shop) in that spot. Something with a little class,” concluded a third.

Dozens of others likened legal weed to liquor or cigarettes, and raged against the stereotype that cannabis consumers are lazy and irresponsible.

When Rocco Petrilli, chairman of the National Cannabis Risk Management Association (NCRMA), hears about this squabble among neighbors in Denver, he notes that every business must navigate risks. Cannabis businesses face risks both internal and external.

“People in the cannabis industry have internal risk associated with running a business, but they also have this external risk that people outside the industry inflict on them,” largely because of perception, not reality, Petrilli says. “Perceived risks come from a lack of education.”

Look no further for proof of the legitimacy of the cannabis industry than the fact that “many states ruled cannabis as essential” when most other businesses were forced to shutter in 2020 to help stem the spread of COVID-19, Petrilli says.

The legal cannabis market in the U.S. was valued at roughly $15 billion in 2020, according to Marijuana Business Daily. Legal cannabis sales are projected to surpass $30 billion or more by 2024.

One of the top risks associated with cannabis businesses is that they attract crime.

“It’s not that cannabis businesses attract crime,” Petrilli says, “as much as it is by process or default. Some early dispensaries ended up in high crime areas.”

NCRMA research, which is used for underwriting purposes by the organization’s captive insurer, indicates that three out of four dispensaries are now located in areas of average crime or better.

What’s more, a September 2019 white paper published in the journal Regional Science and Urban Economics concluded that dispensaries lower nearby crime by 19%. According to researchers Jeffrey Brinkman and David Mok-Lamme, “Our results are consistent with theories that predict that marijuana legalization will displace illicit criminal organizations and decrease crime through changes in security behaviors.”

Petrilli notes that dispensaries can be targets for crime because marijuana remains a cash business. “We don’t have a satisfactory banking solution from the federal government yet,” he says. Some banks won’t work with cannabis businesses because the plant remains on the federal government’s list of Schedule 1 narcotics. Congress could change that with the proposed Marijuana Opportunity Reinvestment and Expungement Act, or the MORE Act.

The NCRMA works with dispensaries to recognize and mitigate crime risk.

…And not just stick-up thieves. Consider the alleged $4.85 million Ponzi scheme that the U.S. Securities and Exchange Commission (SEC) believes was operated at the Green Acre Pharms marijuana grow in Washington state. Farmer Robert W. Russell allegedly fleeced millions from investors in multiple states who were enticed by the potential profits from his farm. But the business was never profitable, according to the SEC filing. Russell and his business partner allegedly spent most of investors’ cash on “extravagant luxuries” such as a 65-foot yacht.

“The seemingly unlimited potential to make money in the cannabis industry is enough to lure people into pulling a fast one over on optimistic investors,” David Jagielski wrote in a March 2020 article in The Motley Fool, a financial news outlet.

Insurance and risk managers counter that vigilance against such malfeasance is exactly what their industry excels at.

“Regulators run background checks and heavily scrutinize everyone in the cannabis industry,” says Chris Sunderland, a senior P&C underwriter with Sierra Specialty who works with cannabis businesses. “The goal is to keep known criminals out of the industry.”

The Colorado Department of Revenue’s Marijuana Enforcement Division issued an alert in January 2021 encouraging all licensed cannabis-industry employers to be on the lookout for scammers who pose as state regulators, attorneys, law enforcement officials or marijuana product suppliers. Some of these individuals have asked pot-shop employees to share photos of a dispensary’s emergency alarms, exits and safes. “Another danger for cannabis companies is the threat of people hacking into their systems,” David Jagielski notes in The Motley Fool article.

Sunderland suggests that the hacking risk, which is now pervasive for enterprises large and small in nearly every industry, is reduced in cannabis.

“No credit cards and no banks,” Sunderland says. “Therefore, there is no payoff for hackers.”

He adds that customized cyber liability policies are now available for cannabis businesses.

Like any retail business, a marijuana dispensary, CBD boutique or cannabis manufacturing site must plan for staff and customer traffic and parking needs. This may be a legitimate concern for nearby businesses and neighbors, which is why the NCRMA encourages cannabis businesses to work with local municipalities on traffic plans as well as engage in a healthy dose of community relations.

“Parking lots do need to be large and well laid out, with easy street access,” Sunderland says. “Before a permit is issued by the city or the county, these issues are addressed. We inspect our clients and confirm that the parking and traffic flow is adequate.”

Cannabis businesses hurt nearby businesses and drive down home values.

“”n general, cannabis businesses bring commerce into the area, which in turn can raise property values,” Sunderland says. A study by the CATO Institute looked at homes located near dispensaries between 2014 and 2019 and found that their value increased approximately 8.4%. That impact has been even more dramatic in some cities.

Sunderland adds: Cannabis customers and employees utilize the other businesses in the area, “thereby bringing growth to the area.”

Addiction experts stand firm behind science that indicates marijuana use is additive. According to the National Institute on Drug Abuse: “People who use marijuana frequently often report irritability, mood and sleep difficulties, decreased appetite, cravings, restlessness, and/or various forms of physical discomfort that peak within the first week after quitting and last up to 2 weeks.”

Although cannabis product liability is an area of the law that’s still developing, the recent scenario in which largely black-market THC vaping devices were linked to lung illness propelled risk management work in the cannabis industry.

Widespread legalization is likely to usher in even more precedent around cannabis product liability, just as it did with alcohol and cigarettes. According to Seattle Attorney Neil Juneja, a managing partner at Glean Law, PLLC: “Alcohol has established a place in legal and social history that has allowed for the development of a body of laws and customs that regulate and mitigate liability claims related to its use.”