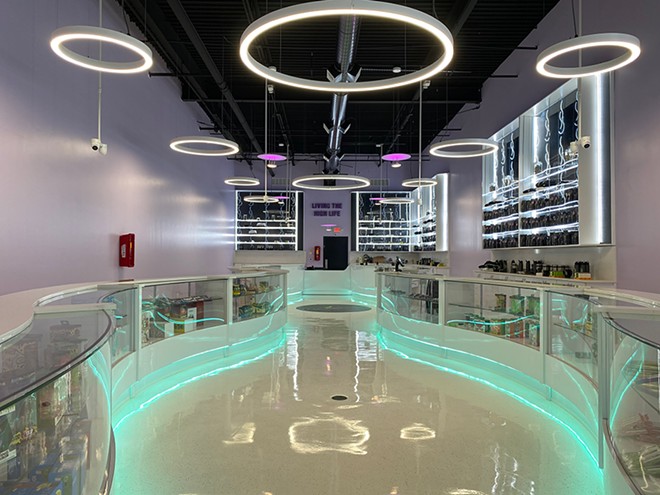 A new cannabis dispensary that claims to be Detroit’s largest is set for a grand opening on April 20. It also may very well be one of Detroit’s most interestingly designed.

Leaf and Bud is located on Livernois Avenue, tucked around the corner behind the Value Save grocery store not far from the Avenue of Fashion and the University of Detroit Mercy. Despite its unassuming location, inside is a dispensary with a sleek, modern feel. The long showroom is flanked by two curvy, neon-accented countertops, and on a recent visit, workers were in the process of stocking the counters with a variety of products, including those from Future Grow Solutions, which shares a space in the 140,000 square-foot building.

Leaf and Bud and Future Grow Solutions are separated by a security gate. But over at the grow operation, there’s a similar futuristic feel.

The space houses rows of Future Grow Solutions’ “CropTowers,” 11-foot-tall towers that Zangoulos says uses a “hyperponic” system to grow cannabis plants that shortens the vegetation cycle by weeks. Each tower holds 102 plants, which are suspended in the air and surrounded by lights.

“We can take a clone from a mother, we can develop roots on that plant, and then we can put that plant directly into flower at a smaller size,” he says. “We’re surrounding that whole tower with LED light. So we’ve sort of saved money on the power consumption with the modern lighting, and we’ve skipped like a two to three month life cycle that would be required in a traditional grow.”

“It’s all computer controlled,” he says. “It’s all water fed, no dirt, no mess. It’s a very clean approach to it.”

“I got into it because I had a medical issues,” he says. “I have Crohn’s disease. So I was one of the first thousand patients in the state of Michigan to get a card. And from that day, my life changed.”

Zangoulos says he’s amazed at how far the industry has come since then. When he saw the sophisticated grow operation at Future Grow Solutions, “I couldn’t not say yes,” he says.

“It’s awesome,” he says. “Every day you go in and you smile and you sing to your girls, and I say hi and make sure they’re fed.”

The store is only open for medical marijuana cardholders for now, but Detroit just started taking applications for adult-use licenses and Zangoulos says they’ve applied.

It’s a new era for marijuana in Michigan. Sign up for our weekly weed newsletter, delivered every Tuesday at 4:20 p.m.