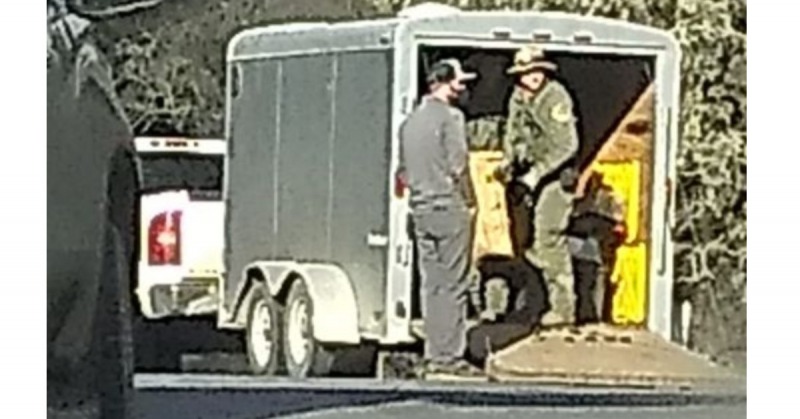 Cannabis worker pulled over by MET. [Photo from a witness]

A week ago, on March 25, a reader sent us a photo of a law enforcement officer removing cannabis clones from trays in a trailer at the Dinsmore Store and putting them into bags. Janice Mackey, a spokesperson for the California Department of Fish and Wildlife told us that the situation wasn’t the result of a traffic enforcement stop.

According to Mackey, wildlife officers “at the Dinsmore Store when an officer greeted an individual he had seen driving previously in the day walking by his patrol vehicle. Upon speaking with the individual, officers noticed he was exhibiting extremely nervous behaviors.”

She said that the driver was asked for his license and an investigation revealed that he was driving on a suspended driver’s license. She said, “Officers observed a package of cannabis in plain sight in the back seat of the vehicle he was driving and determined the individual did not have the necessary permits or licenses to legally transport commercial cannabis.”

Officers then searched the. “Approximately one pound of dried and packaged cannabis and over 1,200 cannabis plants were found,” she told us. “Officers cited the individual accordingly for the violations and the unlawful product was seized as evidence.”

According to Mackey, “The subject was cooperative with the officers; making small talk even after the citation occurred.”